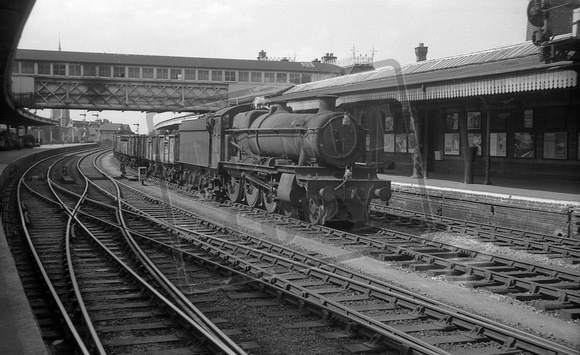 Off Cardiff East Dock but about to move to Newport Junction, officially in the August but was probably already on loan.

Peter Kerslake says " A Newport engine in earlier years 6847 " Tidmarsh Grange " runs on the through road here at Gloucester Central on the 19th . June , 1965 doubtless with iron ore empties from the South Wales furnaces homeward bound to the East Midlands.
The lengthy covered footbridge seen here joined Central with Gloucester Eastgate , the former Midland Region station which was still in use at this time and my camera is pointed down towards South Wales on what look to be a good sunny day with a variety of steam motive power still to be seen and recorded in this ,the final year for such images , with Severn Tunnel Junction and Newport being two of the Welsh Motive Power Depots remaining open to steam "
Powered by ZENFOLIO User Agreement
Cancel
Continue