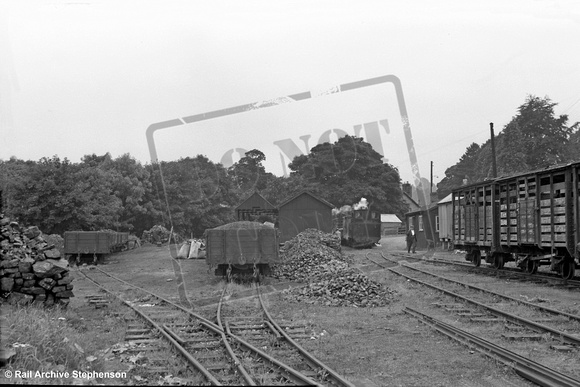 WLLR No. 822 at Llanfair Caereinion station on 10th September 1951. The goods stock at this date comprised two brake vans, four goods vans, two cattle trucks, six open sheep trucks, thirty-one opens, and four timber trucks, all of W&LLR/Cambrian origin; two cattle trucks and four opens built by the GWR-built and six smaller opens converted by the GWR from timber trucks. Unlike the other Welsh narrow-gauge railways there were no slate quarries on the line generating outgoing mineral revenue, so the traffic along the line consisted of mixed merchandise, coal for local consumption and livestock for the cattle market. All but the latter required labour intensive transhipment at Welshpool, so it was surprising the line lasted until 1956.

The terminus at Llanfair Caereinion had a combined booking office and waiting room and a goods shed, cattle dock, loop and originally two sidings, soon increased to cater for the timber traffic. The galvanised store shed on the left of the train was added in 1938.