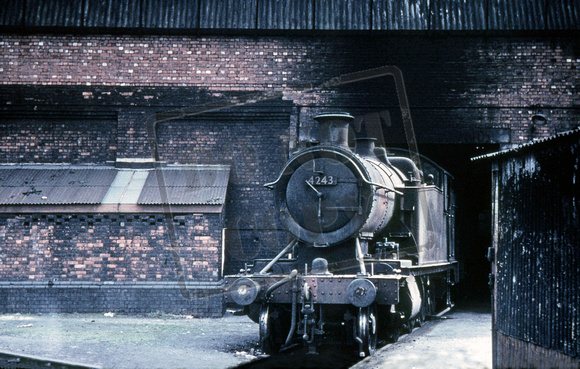 An unusual but nicely composed image of one of Mr. Churchward's Heavy Mineral Tank Locomotives in the shape of 4243 basking in the sunshine here at Tondu Depot in 1964 .
Tondu Motive Power Depot dated back to 1889 , being constructed by the Great Western Railway and replacing a smaller and much ealier establishment going back to 1865 and the days of the Ogmore Valley Railway .
This class of large 2-8-0 Tank locomotives was introduced in 1910 to cover the needs of the developing South Wales mineral traffic and was the Tank Engine version of the "2800 " class of 2-8-0 tender engines which had come into service some seven years or so earlier.
The prototype of the class had been 4201 which had been introduced in 1910 , with the production versions coming from Swindon Works in 1912 with enlarged coal bunkers capable of holding three and a half tons of coal.
Following the post war decline in the 1920's of mineral traffic a number were rebuilt with extended rear frames , a larger coal bunker and an additional rear pony truck , but 4243 remained in its original condition during its working life.
© Rail-Online
Powered by ZENFOLIO User Agreement
Cancel
Continue