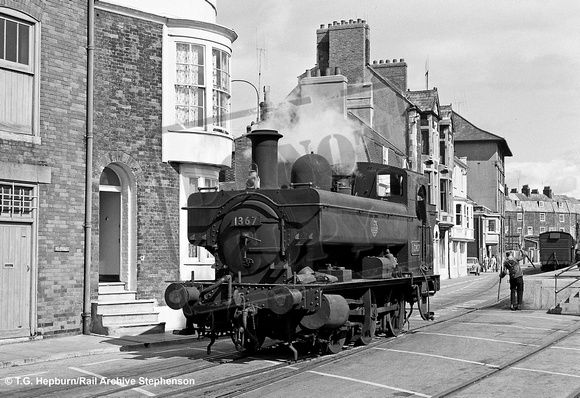 Peter Kerslake says "This fine view shows clearly the narrow and restricted streets of Weymouth through which both passenger and freight workings were obliged to pass coming up from the busy Weymouth docks with its regular boat train and freight traffic, especially during the Summer months.
Built in 1933 this engine and her five sisters had been Mr. Collet's development of Mr. Churchward's earlier "1361" class of saddle tanks and were initially used as Works shunters within Swindon Works .
In the early 'fifties, however, three of the class namely 1367, 1368 and 1370 were moved to here at Weymouth, whilst 1369 and 1371 remained at Swindon shed and the pioneer of the class 1366 was to be found at Taunton.
Later service took 1367 seen here together with 1368 and 1369 down from Weymouth to Wadebridge for use on the Cornish china clay traffic, but 1367 was in poor condition and was invariably stored out of use at Wadebridge depot leaving 1368 and 1370 to do all the work in and around the Bodmin and Wadebridge areas."