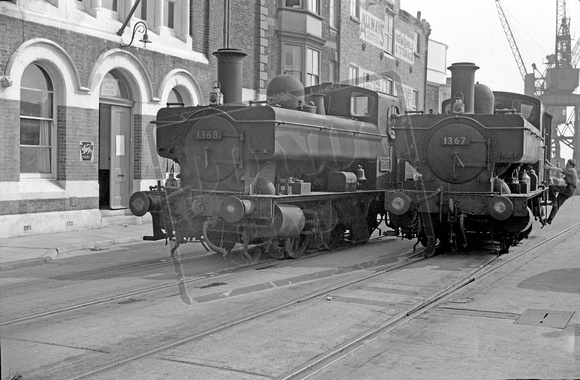 With 1368 outide the Youth Hostel.

Peter Kerslake says "The lucky cameraman has recorded two of the three Weymouth based pannier tanks resting together here at the docks at Weymouth from where they worked both lengthy passenger stock and freights to and from the main line station and connecting with the Channel Islands steamers.
Negotiating the narrow Weymouth streets was quite a feat with parked vehicles and holiday traffic requiring a railwayman to walk ahead as a warning of the approaching train to errant motorists and wandering pedestrians.
Originally used within the confines of Swindon Works as works shunters following their build date in 1933 numbers 1367, 1368 and 1369 were moved down to Weymouth in the early 'fifties before heading down into Cornwall in 1962.
Shedded at Wadebridge the trio worked the china clay freights destined for the docks at Fowey, replacing the Beattie Well Tanks but 1367 was regarded as the less reliable of the trio whilst 1369, with its new boiler from 1960 was the best and managed to survive into preservation."
© Rail-Online
Powered by ZENFOLIO User Agreement
Cancel
Continue