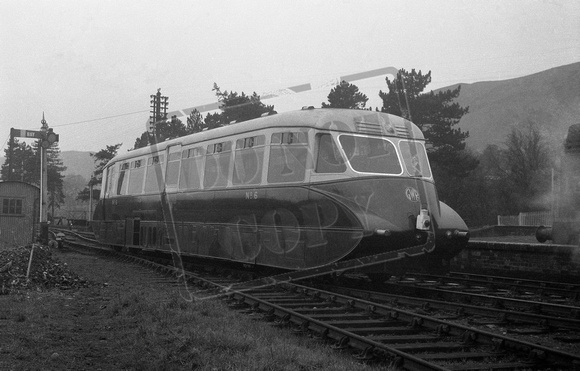 Stabled in the yard between services.

Peter Kerslake says "An early record of the sixth of the G.W.R.Diesel Railcars seen here at Malvern in 1937, just three years from entering service with bodywork by the Gloucester Railway Carriage Company and with a single power unit by A.E.C. of Southall producing 121 horse power thereby gving a maximum speed of 60 m.p.h.
Railcars numbered 5 , 6 and 7 had been introduced to handle secondary passenger workings from Motive Power Depots such as those at Weymouth , Reading and Newbury, but number 6 seen here was based at Worcester for many years for services such as this to Malvern , with Worcester as late as 1956 having on its books the most of the Railcars still in service with this example keeping company with cars numbered 5 , 7 , 10 , 20 and 32 , the only Depot to have more than five at that time.
The earlier versions with their rounded ends looked far more attractive than the later wedge front models , and in this view number 6 still retains her full body panels , the panels covering the bogies being removed in later years in order to improve access for maintenance to the running gear ."
Powered by ZENFOLIO User Agreement
Cancel
Continue