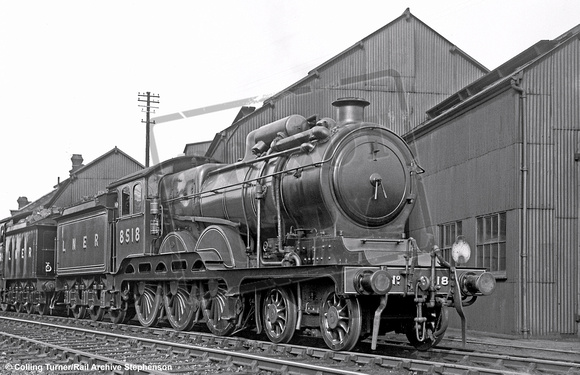 GER B12/1 4-6-0 No 8518, fitted with an ACFI feedwater heater, at Ipswich in the early 1930s.
Peter Kerslake says "8518 has the French designed ACFI equipment for heating the boiler feed water with its massive twin heat exchanging drums on top of the boler with their associated feed pump and plumbing running up from the footplate.
Like the ornate valances over the driving wheels,, the water heating equipment was removed in later years, being expensive to maintain.
8518 was an early member of the class of which 51 were built by the Great Eastern Railway at their Stratford Works from 1910 with an additional 20 constructed by Beardmore and Company during 1920 and 1921."
Photo: Colling Turner/Rail Archive Stephenson
Colling Turner/Rail Archive Stephenson
Powered by ZENFOLIO User Agreement
Cancel
Continue