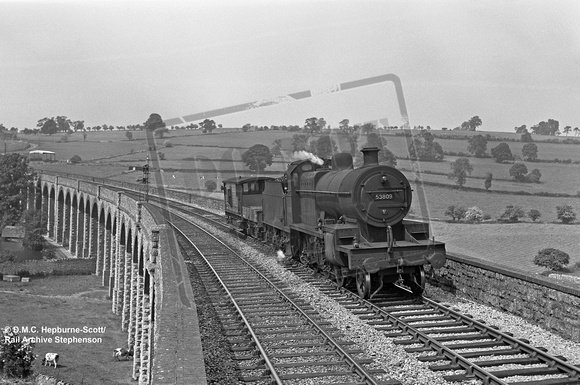 Peter Kerslake says "A fine portrait of 53809 heading a lightweight freight over Shepton Mallet viaduct in June 1960 when the line was very much open to extensive passenger and freight workings, especially during Summer Saturdays when additional long distance holiday specials were frequent sights on the line as they ran between the North of England and the South Coast at Bournemouth.
Introduced in 1914, six of the class were built by the Midland Railway at their Derby Works and a further five were constructed by Robert Stephensons in 1925, the 7F's becoming the mainstay of passenger and heavy coal and mineral freight duties on the Somerset and Dorset. The first of the class, 53800 lasted until 1959, the first to be withdrawn, with the last survivor, 53807 soldiering on until September 1964.
53809 made it into preservation after languishing at the Barry scrap yards for eleven years and was purchased and went to Butterley, working its first Special in May 1981."