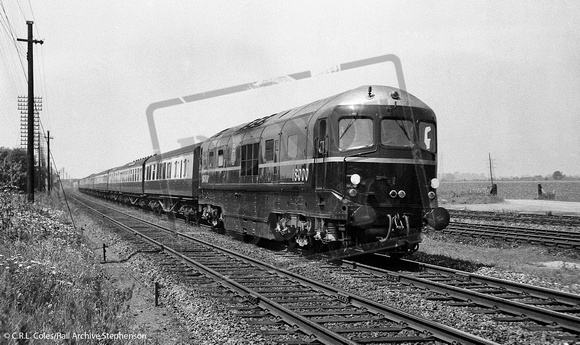 Gas turbine No.18000 passes Iver with a Plymouth to Paddington express in 1950.

Peter Kerslake adds "An early image of the Brown Boveri gas turbine 18000 on the early morning 7.15 a.m from Plymouth North Road to Paddington. This would be a Tuesday or Thursday, with 18000 working down to Plymouth on Mondays and Wednesdays.
18000 took up its duties on the Paddington to Plmouth line on 22nd May 1950 and continued after the summer of 1950, with a number of runs incorporating the former GWR Dynamometer Car. However persistantg problems with the locomotive's train heating boiler began to become apparent in the early Winter, taking 18000 out of service for prolonged periods at Swindon Works between November and December 1950 before it was reduced to a number of milk and parcels duties in early 1951. 18000 returned to the Bristol line in April 1951 where demands on the train heating boiler would be less than on the Plymouth services."