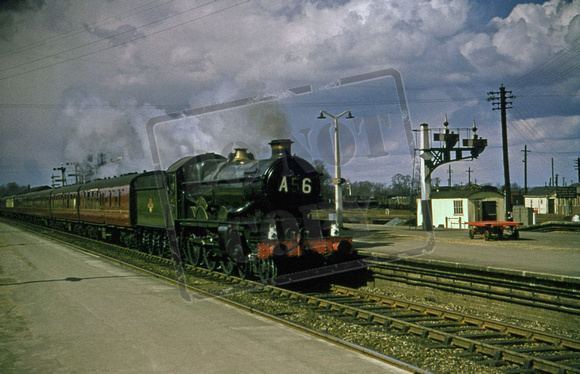 Up Pembroke Coast Express. Came identified as 5065 but records show that loco was never fitted with double chimney as shown here. Unfortunately I cannot read the nameplate so we will never know its identity.

Peter Kerslake says "The year is shown as 1962 so this is undoubtably one of the "Castles" formerly shedded at Swansea's Landore Depot , but when it closed to steam in June of 1961 ten of its well kept "Castles" went to Neath, nine went to Llanelly and one to Old Oak.
Whichever "Castle" it is, she's in splendid condition and has the full train, having come on to this working at Swansea at a time when the "Hymek" Diesels were now taking over such workings, but their failure rate was so high that the Neath and Llanelly "Castles" were still working this main portion well after the Summer of 1962 as well as being regular performers on the section of the "Pembroke" between Swansea and Pembroke Dock."