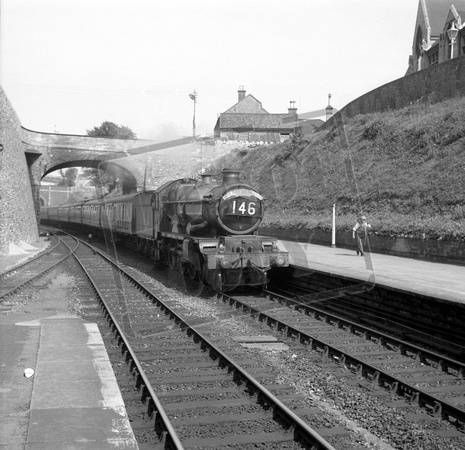 On the Down Torbay Express

Almost cetainly either an Old Oak or Newton Abbot (It's 83A) allocated " Castle " as both sheds were responsible for providing motive power for the " Torbay Express " workings , the down 12 noon departure from Paddington heads non stop through Teignmouth 's "down " platform , the area in the background having originally been a tunnel many years previously .
Usual practice was for this engine to work through Newton Abbot all the way down to the terminus and ultimate destination at Kingswear , and for it to return later in the afternoon to Newton Abbot , often tender first , on a freight or local passenger duty for it to be readied overnight for the Paddington bound " Torbay Express " from Kingswear the following day.

Running non stop through Teignmouth and nicely turned out by Old Oak Common for the down 12 noon departure from Paddington , the down " Torbay Express " , this unidentified " Castle " would have been no surprise for the " spotters " on the sea wall here as this working was shared in the ' fifties in both directions between Old Oak Common and Newton Abbot Motive Power Depots, where the respective Shedmasters would roster one of their well maintained members of the class to this tightly timed duty
Powered by ZENFOLIO User Agreement
Cancel
Continue