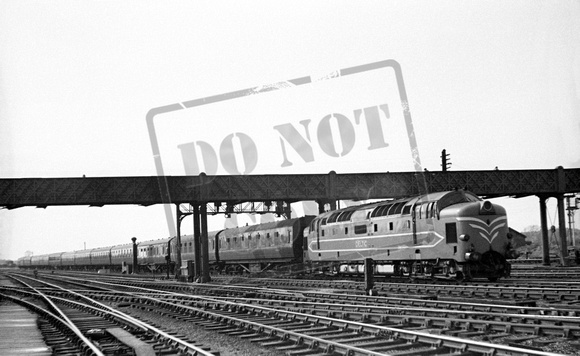 Peter Kerslake says "In charge of an impressive twelve coach formation the Blue Deltic heads through Rugby some three years after having entered service and a year before her transfer from the Midland Region to Finsbury Park depot on the Eastern Region in 1959.
Her early years had been spent allocated to Liverpool's Edge Hill depot which was close to the subsidiary Napier Works of the English Electric Company situated at nearby Netherton where her power units had been built, her duties taking her not northwards across the border to Glasgow but southwards to Euston.
Following her later years spent at Finsbury Park the locomotive was moved in March of 1961 to English Electric's Vulcan Foundry at Newton le Willows where the production run of the Deltics had commenced, thereafter in April of 1963 she was an exhibit in the Science Museum before ending up at the National Railway Museum at York."
Powered by ZENFOLIO User Agreement
Cancel
Continue