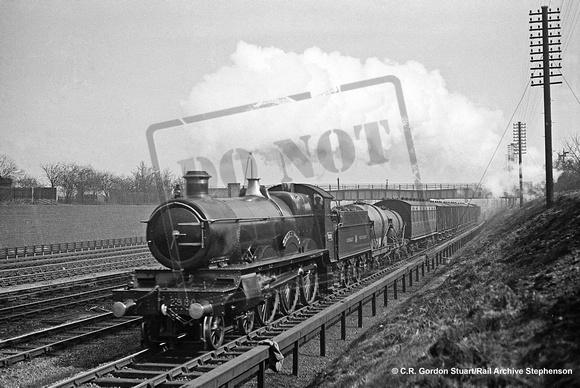 Saint class 4-6-0 No 2980 Coeur de Lion approaches Ealing Broadway with a down train of milk and fish empties for the west country in c1930. The coach appears to be of Cambrian Railway origin.

Peter Kerslake says "Rebuilt from its original "Atlantic" 4-4-2 wheel arrangement and originally constructed as such in May of 1905 when it was originally numbered 180 "Coeur de Lion" was named as such in 1907 and later renumbered 2980 upon its rebuilding to the more conventional 4-6-0 wheel arrangement in January of 1913.
This view of empty milk vans heading back down to the Westcountry for the next day's fresh supplies for the Capital shows that at this date milk was contained in churns and carried within the vans although, most interestingly there are two milk tank units immediately behind 2980, both of which are doubtless newly put into traffic and providing an insight of what future milk workings would look like."