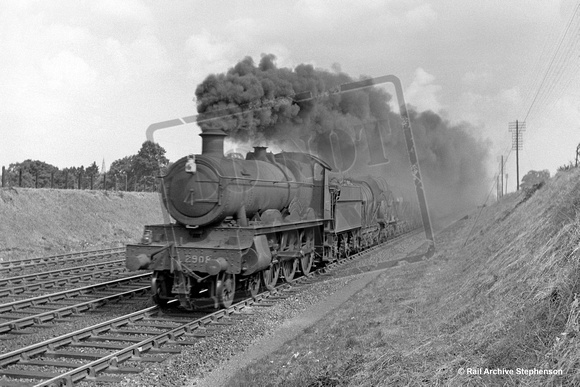 Peter Kerslake says "Laying a smokescreen over the Buckinghamshire countryside a run down looking 2908 "Lady of Quality" appears to be struggling with a tender of poor quality coal in this 1947 portrait at the head of what appear to be milk empties heading westwards from the Capital.
Built at Swindon in May of 1906 the locomotive did not receive her nameplates until May of the following year.
Early years saw the "Saints" working the Paddington to Wolverhampton line, later being favoured for the heavy Westcountry passenger rosters from and back to Paddington, later seeing service on the Fishguard boat trains and South Wales express workings.
"Lady of Quality" survived in service until December of 1950."