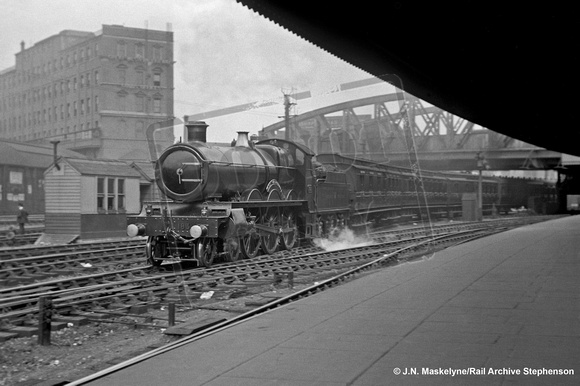 Peter Kerslake says "Initially entering service fresh from Swindon Works in July 1905 and numbered 183 this member of the "Saint" class started life with an "Atlantic" 4-4-2 wheel arrangement, one of thirteen so built, the remaining six of the 1905 batch of nineteen being built as standard 4-6-0's .
Many of the early locomotivs did not receive names until they had been in service for some while, and 183, initially named "Red Gauntlet" as seen here in this 1912 image was not so named until June 1906, her nameplates being altered to "Redgauntlet" many years later in June of 1915.
In this view the locomotive would, therefore, still been numbered 183 and is bearing her original nameplates, receiving her 2983 numberplates in the late December of this same year, namely 1912"