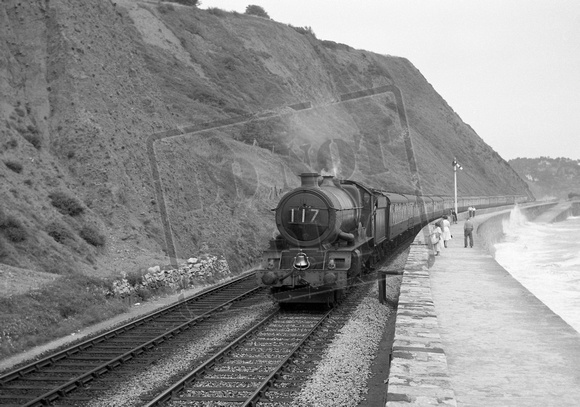 There was one ‘King’ which needed no further identification because of the bell on the front platform fitted for its visit to the United States in 1927. No.6000 King George V is on the 8.50am Saturdays Only Paddington to Paignton train in 1956.A splendid shot of 6000 on the sea wall, unusually quiet but apparently a warm day as there aren't many coats or jackets to be seen There's a strong sea running and it's high tide as well so the sea wall is taking a bit of a pounding but the crew on 6000 aren't bothered. 6000, earlier allocated to Bristol Bath Road was at Old Oak Common by the mid ' fifties when this picture was taken and so became a regular sight down in the far West, unlike when at Bristol Bath Road where it was rostered on " West to North " duties to and from Shrewsbury, not venturing Westwards at that time.
6000 has an impressive load behind his tender, as there appear to be fourteen coaches on this working and it may be that there is a Plymouth portion which would be detached at Newton Abbot, the next stop.
Summer Saturdays at this time of year in the mid 'fifties meant plenty of action at Newton Abbot, and there were always Locomotive and Traffic Inspectors about, particularly on the Westbound platform ends, to oversee trains working forward to both Kingswear and Plymouth, very many of the latter requiring Newton Abbot shed to have on hand a supply of pilot engines to assist the train engines over the South Devon banks down to Plymouth.
A number of workings from the North down to Penzance would also need a fresh engine from Newton Abbot, adding to the general excitement and interest for the lucky lineside enthusiasts.
This splendid view dated from about 1956 shows that 6000 has not yet received its replacement inside cylinder block and associated new front frames which were fitted to fourteen of the " Kings" between September 1954 and June 1958 and I would suggest that 6000, which was one of those fourteen, was so treated either during its Heavy Intermediate Overhaul at Swindon in October 1956 but more probably during its subsequent Heavy General Overhaul in March 1958.
Powered by ZENFOLIO User Agreement
Cancel
Continue