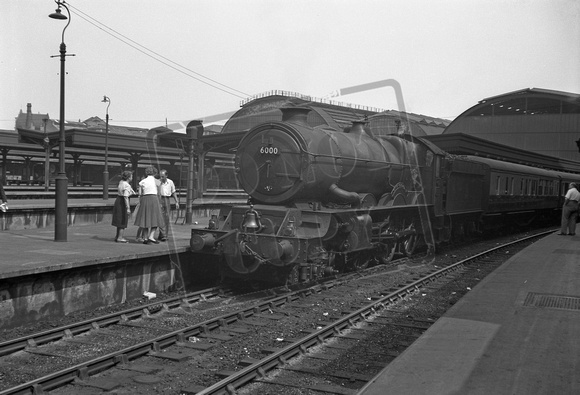 Taken on a very quiet Sunday in 1954 or thereabouts 6000 awaits departure from Platform 2 on a down express.
An Old Oak Common engine at this time 6000 had previously been at Bristol Bath Road, the only member of its class allocated there, and whilst there it ran between Bristol and Shrewsbury via the Severn Tunnel on "West to North " expresses.
Once at Old Oak it was then deployed, in common with their other "Kings", on the Birmingham, Bristol and Plymouth main lines.
Whilst working away from home in East Anglia I used to spend time at weekends in the London terminii, but being a "Great Western " Plymouth boy I usually ended up at Paddington....how I used to wish that I was on one of the West of England expresses rather than having to go back to my lodgings via Kings Cross or Liverpool Street!

This could have been the morning at Paddington when I suffered my first and thankfully only encounter with the dreadful " Smog ", a combination of smoke and fog so common in those days, particularly in large Cities.
Whilst at the terminus I was conscious of it rapidly getting darker and darker to the extent that within five minutes or so a sunny Sunday morning was rapidly turned into a blackest of nights, but by the time that Paddington's lights had all come into operation the "Smog" started to clear and we were back into daylight again.
A frightening experience, akin to a full eclipse !
Powered by ZENFOLIO User Agreement
Cancel
Continue