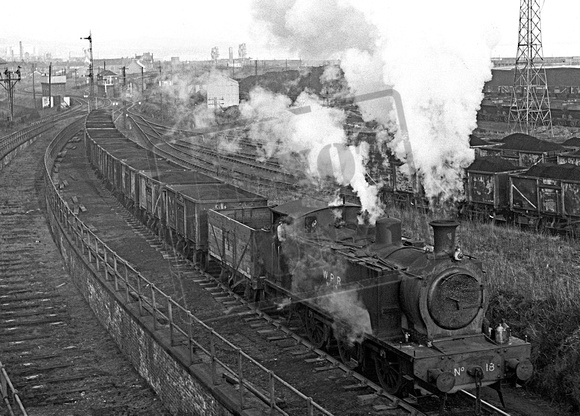 On a bitterly cold February day in 1968, WPR No. 18 draws out of the BR exchange sidings past Methil West signalbox at 3.30pm with 15 loaded steel wagons containing coal brought in to Methil from non-Wemyss pits. The large white building partially obscured by drifting steam from the safety valves is the new WPR engine shed built in the mid 1960s but doomed to become a white elephant following the disastrous fire in September 1967 at the Michael pit. The trackbed of the ex-NBR Wemyss and Buckhaven Railway, which can be seen on the left in this view had been closed in December 1966 to goods traffic and in January 1955 to passenger services with the final train of two coaches hauled by Thornton D30 4.4.0 No 62418 “The Pirate”.