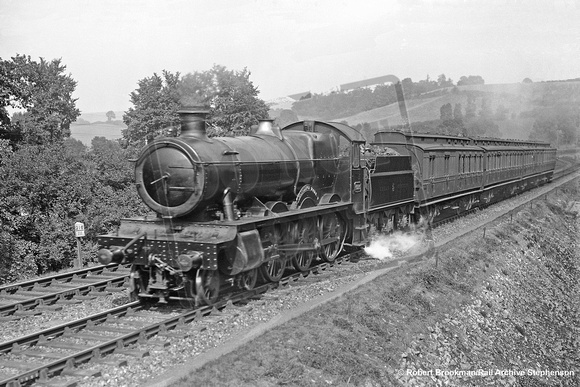 GWR Hall class 4-6-0 No 4926 Fairleigh Hall climbs Dainton with a down local in 1932.
Peter Kerslake adds "No pilot engine here for 4926 "Fairleigh Hall" as her rake of Clerestery coaches on this local stopper heading westwards on Dainton bank at milepost 214 is well within her limits.
4926 would have been just a couple of years old in 1932, being one of the initial batch of "Halls" emerging from Swindon Works from 1928 to 1930, and her splendid condition is evident in this fine view.
In later years she spent time allocated to Wolverhampton Stafford Road".
Photo: Robert Brookman/Rail Archive Stephenson
Robert Brookman/Rail Archive Stephenson
Powered by ZENFOLIO User Agreement
Cancel
Continue