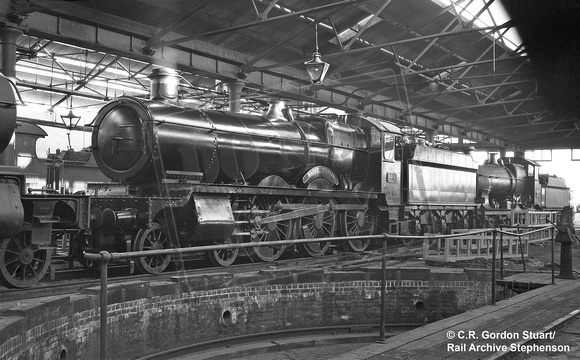 MR M Wiltshire says "This looks like the original Reading shed before rebuilding as an all through shed and a new longer turntable installed outside in the early 1930's".

Peter kerslake says "The prototype of the extensive fleet of "Hall" class locomotives 2925 "Saint Martin" is seen here in her rebuilt form in the 1930's at an unidentified location, the locomotive bearing her new 4900 cabside numberplates and clearly in splendid condition and not long, I suggest, following her rebuilding.
Officially being recorded as being rebuilt by Mr. Collett at Swindon from a "Saint" to a "Hall" in December of 1924 "Saint Martin" proved highly successful in her new form, heralding a first order of no less than eighty"Halls" with "Saint Martin" being renumbered 4900 in early December of 1928.
In her rebuilt form 4900 survived until April of 1959 working from a number of Motive Power Depots, including Worcester and Taunton in her later years."