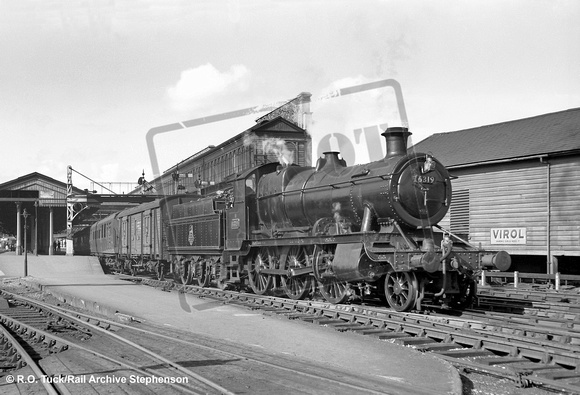 Peter kerslake says "My 1956 shed book has 6319 allocated to Plymouth's Laira depot at the date of this view so with this rake of Southern Region stock I am fairly confident that she worked up to here at Exeter from Plymouth by way of the Southern Region's North Dartmoor line, this class being the largest of the Western Region's locomotives permitted to work that line via Okehampton and skirting the northern fringes of Dartmoor.
Whilst Western Region engines and crews were required to work that line Southern Region engines and crews in return worked the Western main line between Exeter and Plymouth on a daily basis in order to familiarise crews in the event of either route being blocked, with a daily passenger duty being headed by a "Westcountry" or "Battle of Britain" between Plymouth and Exeter and running via Newton Abbot."