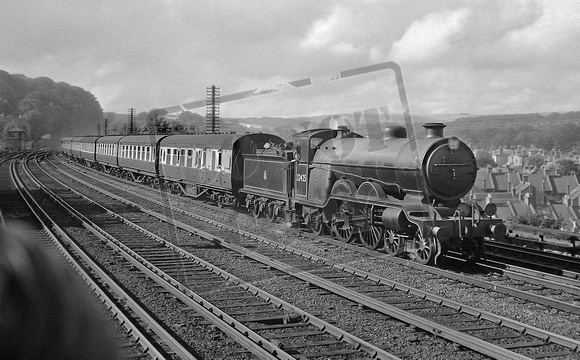 Ex-London, Brighton and South Coast Railway Marsh 'H2' class 4-4-2 No. 32425 'Trevose Head'. Built at Brighton in December 1911 as LB&SCR No. 425 and withdrawn in September 1956.
As a Yorkshireman, I am proud that the genesis of Douglas Earle Marsh's 'Brighton Atlantics' begins not in the sunny south but in the somewhat grittier environs of Doncaster's 'Plant' and the Airedale Foundry of Kitson's of Leeds but there's no space here to elaborate on their early history. Marsh's second batch of six that included 32425 (seen here in Aug. 1952 at Preston Park in Brighton) were built (under Lawson Billinton's stewardship) in Brighton. No. 32424 'Beachy Head' became Britain's last working 'Atlantic' when withdrawn in April 1958.