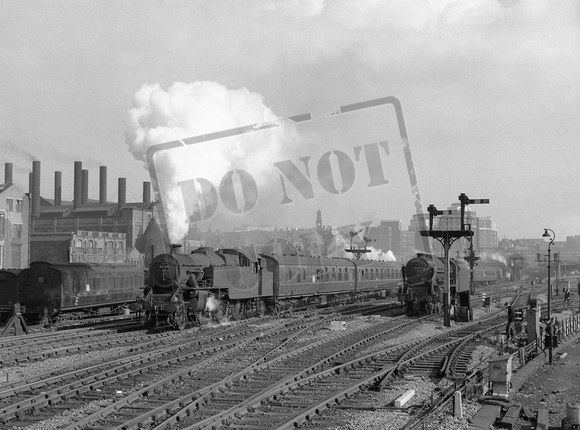 With a semi-fast to Bradford passing Patriot 45536 waiting to work the up Devonian
A really nice photograph here at Leeds City with " Patriot " 45536 waiting to take the Northbound " Devonian " onwards to Bradford Forster Square , relieving the engine working in from Bristol .
Bristol Temple Meads was the limit of Midland Region operations such as the " Devonian " , the southbound working invariably being taken back down into Devon by one of Newton Abbot's " Castles " which had earlier in the day worked the northbound " Devonian " to Temple Meads , handing over to the Midland Region engine there.
Serving Birmingham , Derby , Sheffield and here at Leeds the " Devonian " owed its relatively long life in operation to these major cities which it served , the train being in operation from 1927 until 1975 , exceept for a gap in the war years .
© Rail-Online
Powered by ZENFOLIO User Agreement
Cancel
Continue