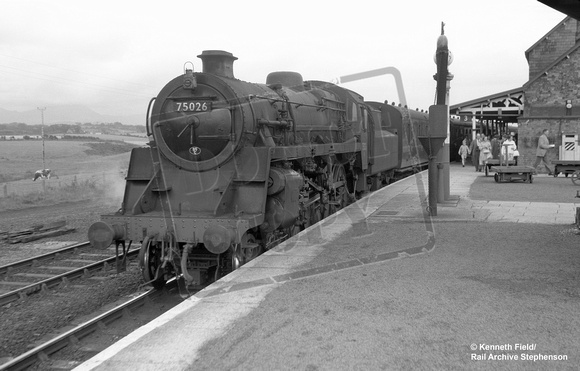 Double chimney BR 4MT 4-6-0 No 75026 waits to leave Afonwen with an up train.
Peter Kerslake says "75026 had a varied life, its first allocation when built in 1954 was Plymouth Laira, when in company with 75025 and 75028 it was put to use on piloting duties assisting passenger workings to and from Newton Abbot over the South Devon banks, as well as working freights in and around the Plymouth area. As the diesels arrived and piloting duties ended it was sent here to the Cambrian.
Afonwen was an important Cambrian location and owed its existence to the fact that it was the junction between the Cambrian and the former LMS line from Caernarvon and further north which brought holidaymakers Butlins Pwllheli holiday camp just a short distance away at Penychain.
Summer Saturdays in the 'fifties when holidays were at their peak would see an endless stream of rail traffic at Afonwen, invaraibly heavily loaded workings with a variety of motive power at their head."
Photo: Kenneth Field/Rail Archive Stephenson
Kenneth Field/Rail Archive Stephenson
Powered by ZENFOLIO User Agreement
Cancel
Continue