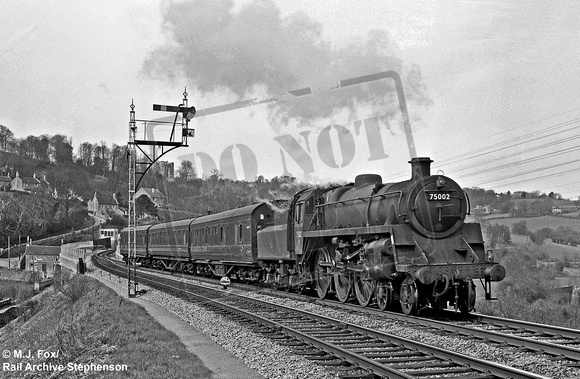 BR 4MT 4-6-0 No 75002 leaves Midford with the 3.20pm Bath to Templecombe train on April 23, 1962.
Peter Kerslake says "The classic surrroundings of Midford, captured so often by the Somerset and Dorset cameramen,. At this point the viaduct and main Somerset and Dorset line crossed over the line from Camerton to Limpley Stoke, which although closed to passenger traffic in the 1920s, was made famous by the "Titfield Thunderbolt" film from 1952 which was filmed on the line."
Photo: M.J. Fox/Rail Archive Stephenson
M.J. Fox/Rail Archive Stephenson
Powered by ZENFOLIO User Agreement
Cancel
Continue