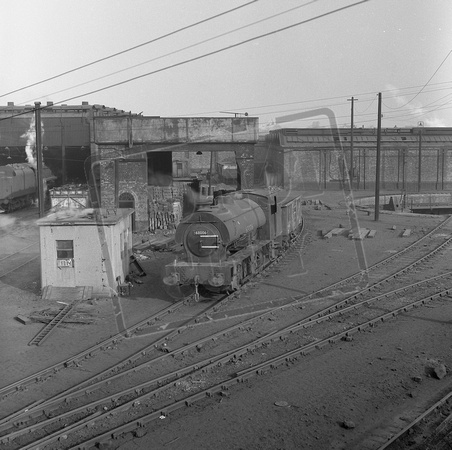 A stranger on the shed, has anyone any ideas why it should be there? At first I thought it may be on its way to the Cromford & High Peak but it went there from Immingham. Geoff Moore may have the answer - "68006 did indeed work oh the Cromford and High Peak Railway up until approximately 1967, it was then withdrawn and sold to the National Coal Board. When it was captured here at Patricroft, it was probably on its way to its new owners. it was built in 1944, by Hudswell Clarke. for the LNER, and was numbered 8005, it then became 68006. It also had WD numbers 5094 and 75094
However Vic adds "Must be pre-May 1967, whilst loco still in service.

Tony Oldfield has the answer "68006 arrived at Patricroft July 1966 for repairs, and was used for best part of a month on shed yard pilot duties. It is this duty it's on in photo. Later returned to Gorton."
© Rail-Online
Powered by ZENFOLIO User Agreement
Cancel
Continue