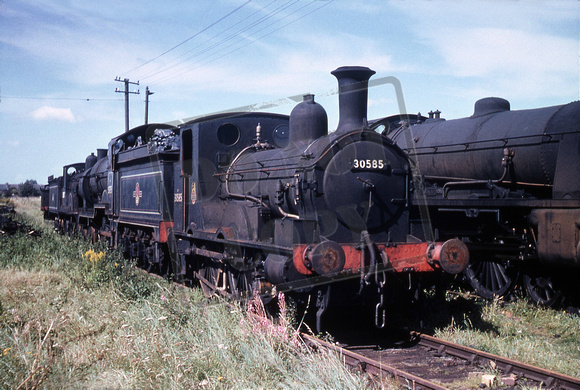 Awaiting works attention. In service until the end of 1962.

Peter Kerslake says "Beattie Well Tank 30585 was one of just three of the class which survived until the late 1980's following twenty years service with the London and South Western Railway and engaged on working suburban services in and around the South Eastern London section.
Originally numbered 314, then 3314 in its former life it was sent all the way from London down to Wadebridge in North Cornwall from 1893. The trio lasted for more than sixty years working the china clay freights in and around the Wadebridge and Bodmin areas until September 1962 when they were replaced by three "1366" class Pannier Tanks transferred to Wadebridge from their former duties at Weymouth docks and as seen here the Beattie tanks needed to go all the way from Cornwall to Eastleigh when major overhauls were due.
Happily, 30585 and 30587 were to escape the cutters' torches although 30586 was not so fortunate."
Powered by ZENFOLIO User Agreement
Cancel
Continue