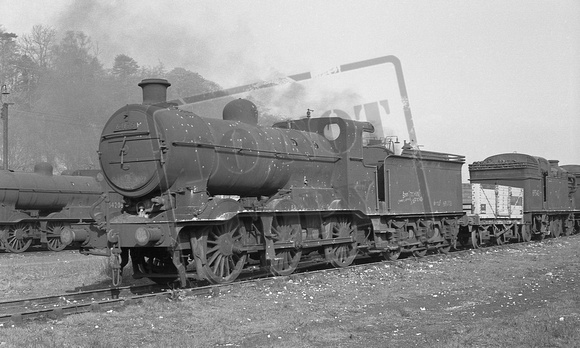 I am intrigued by the state of this engine - what on earth has happened to it? The tender is inscribed 'Goes Itchin comes back scratchin'!
Peter Lineham has the answer - "In the late 50's/early 60's, there was what appeared to be some sort of water treatment facility near Langley junction and sidings, south of Stevenage, close to the water troughs in the mainlines. This facility may have been to remove a lot of the chalk in the local water, before it was pumped in to the troughs. From time to time a Hitchin based loco would arrive with a couple of wagons, to be loaded with what appeared to be chalky sludge, disgorged with much force by a chute from this facility, and then haul them away. Some of the chalky sludge would often end up finding its way to somewhere other than the wagons! I suspect this accounts for the state of this loco, which I remember seeing on a number of occasions, complete with the graffiti on the tender".
I wonder if the 'sludge' was taken to Ranskill near Retford where there was a sludge dump - as seen in the picture of 60025 in 1963 passing the dump?
Peter lineham adds "Since I purchased a copy of this photo, to help with a model I am making, I've had a closer look at it, and I think there may be an alternative explanation for the state of the loco. From memory, the yard at Hitchin was bounded by a chalk embankment - it may just be visible through the trees in the photo. Access seemed fairly easy and youngsters could often be seen wandering around. There appear to be lumps of chalk lying in the weeds beside the track, I wonder whether some of the youngsters had been using the loco for target practice, with the ready supply of lumps of chalk as ammunition!"
John Webb says "There was a sludge pit behind the camera and also a chalk cliff which probably accounted for the peppering the stored locomotives received from individuals"

Peter Speller confiirms the throwing of chalk; "I can confirm that it is chalk the loco having been used as target practice by spotters on the adjacent chalk cliffs. This is confirmed in Barrie Woods book 'Those Were The Days' page 7"
Powered by ZENFOLIO User Agreement
Cancel
Continue