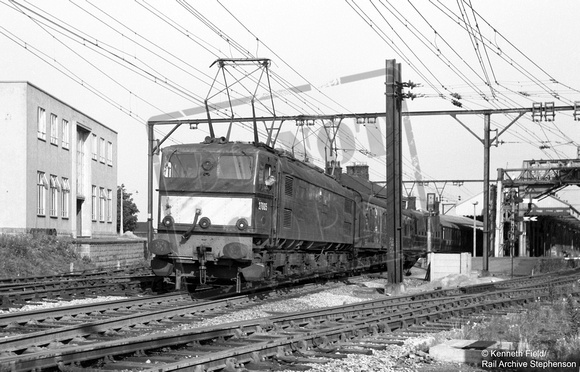 EM2 electric loco No 27005 Minerva leaves Penistone with a down express in c1963.
Peter Kerslake says "High level overhead catenary here at Penistone has made it necessary for 27005 to have her pantograph fully extended in this view, the locomotive having being named "Minerva" in May of 1959.
Longer and heavier than the class EM1's the EM2's had been a post war development from their smaller counterparts, but over optimistic estimates of the traffic taking the cross Pennine line had reduced the planned twenty seven of the class to just seven, with Metropolitan Vickers Trafford Park Works at Manchester supplying the electical equipment and the bodywork, bogies and running gear being built at B.R.' s Gorton Works.
Unlike the earlier designed EM1's the seven 27000's had their buffers and drawgear located on the more conventional main locomotive body and not on the bogies, the locootives being rated as capable of running at the 80 m.p.h. maximum speed which the overhead catenary would permit ."