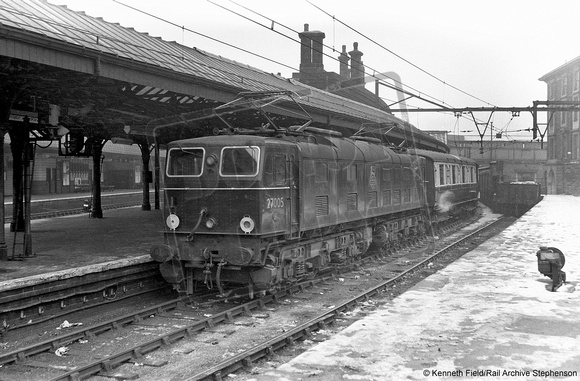 EM2 No 27005 waits at Sheffield Victoria with an express for Manchester London Road in c1955.

Peter Kerslake adds " A snow covered platform adds to the deserted, bleak and wintry appearance of Sheffield Victoria in this view as EM2 numbered 27005 waits to leave, westwards bound for Manchester London Road with a tans Pennie passenger workin in or about 1955.
First stop after leaving Sheffield will doubtless be at Peninstone and these workings were usually timed to depart Sheffield at 45 minutes past the hour, invaraibly being loaded to five coaches.
A twenty mile climb lies ahead for 27005 from the outskirts of Sheffield with the summit of the Trans Pennine line being at Woodhead, but passenger services on this Woodhead route terminated in January of 1970, just one month after the proposed closure had been made public in Decembe of 1969, passenger services thereafter being diverted via the Hope Valley line"
Photo: Kenneth Field/Rail Archive Stephenson
Kenneth Field/Rail Archive Stephenson
Powered by ZENFOLIO User Agreement
Cancel
Continue