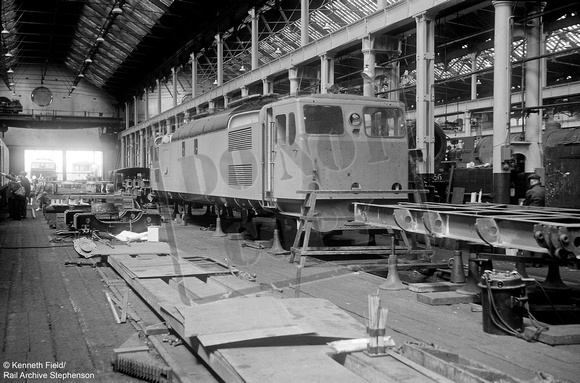 EM2 Co-Co electric No 27001 under construction in Gorton Works during July 1953.
Peter Kerslake says "Recorded images of locomotives under construction are rare but are always of interest, and this photograph of the second class EM2, to be numbered 27001 shows the main bodywork at B.R's Gorton Works.
The massive twin six wheeled bogies are doubtless elsewhere within the Works, ready to be wheeled below the main body seen here at a later date, whilst all the electrical fitments were being built by Metropolitan Vickers at theit Trafford Park Works.
Just seven of the planned twenty sven of the class actually made it into service, the initial order having been drastically reduced when it became clear that there had been an earlier over estimate of the numberof the class required to cover anticipated workings over the Woodhead line."