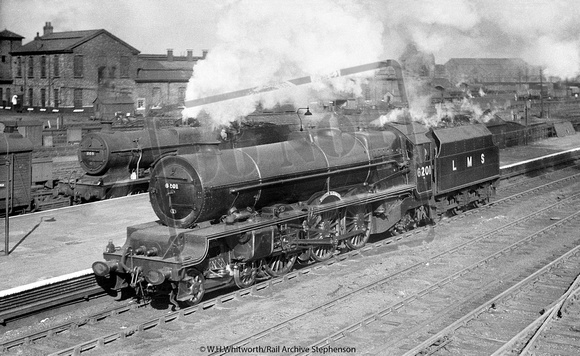 No 6201 Princess Elizabeth running into the station from Crewe North shed in 1947 soon after it was repainted from its pre-war crimson lake in August. In 1946 the LMS had introduced a new glossy all-black livery and the express passenger version of this had maroon and straw lining. All of the Princesses except 6204 and 6212 eventually received this. The cab numbers were 12 in. high and the tender letters 14 in. high, both in straw sans serif edged in maroon. Note the new style of sandbox filler lids.

Ian R Townend says "I am not sure 6205, 6207 or 6209 ever received the post war LMS black livery and all probably retained red livery until repainted in LNWR style lined black."