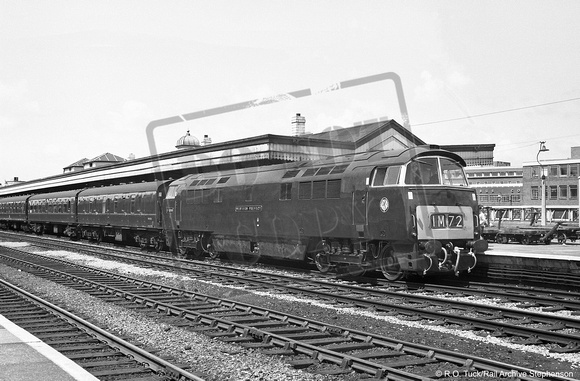 Colin Moss adds "IM72 Swansea - Manchester, D1066 replacing a Hymek at Cardiff. This was the ONLY ever booked diagram for a Western via the north and west SS0 1963. It came off at Shrewsbury and worked back with the 1V55 ex Liverpool. Strangely enough this same loco had worked down to South Wales via the same route, when new from Crewe, just eight days earlier - together with the booked Warship.


Peter Kerslake says "Looking absolutely immaculate in her maroon livery matching her coaching stock a new "Western Prefect" makes a splendid picture here at Cardiff General on the 22nd. of June, 1963.
One of the forty four of her class built at Crewe "Western Prefect" lasted in service until November of 1974 and by the beginning of 1977 there would be just seven "Westerns" remaining, with the final four of that seven being withdrawn that same February although three of the four were saved for preservation together with four earlier survivors."