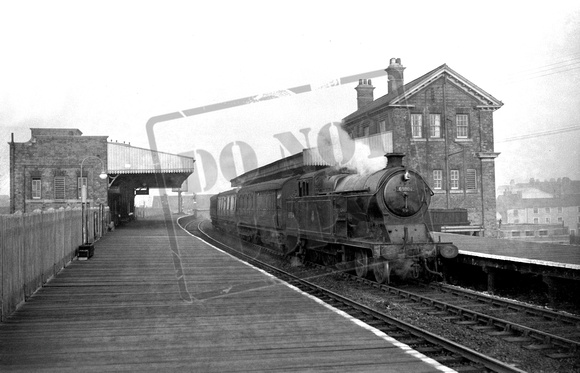 With a local to Nottingham Victoria, note the wooden platforms

Tony Saville adds the details "This station (called simply Mansfield to distinguish it from Mansfield Town - LMR, renamed by BR) was built in the early 1900s on the route of the Mansfield Railway which ran from an end on jct with the LD&ECR at Clipstone to Kirkby-in-Ashfield Sth Jct where it joined the GC and its London Extension, thus providing the GC ready access to a route south for coal from the Nottinghamshire and Nth Derbyshire coalfield. Rolling Stock for the railway was provided by the GC. The line was absorbed into the LNER at the Grouping.

The Mansfield Railway was opened in stages between 06/06/1913 and 04/09/1916 for freight and to passengers 7 months later. The line between Mansfield (Crown Farm) Colliery and Kirkby Sth Jct closed completely on 07/01/1968. Scheduled passenger services had ceased on 02/01/1956 but the station was used for excursion trains long thereafter".
© Rail-Online
Powered by ZENFOLIO User Agreement
Cancel
Continue