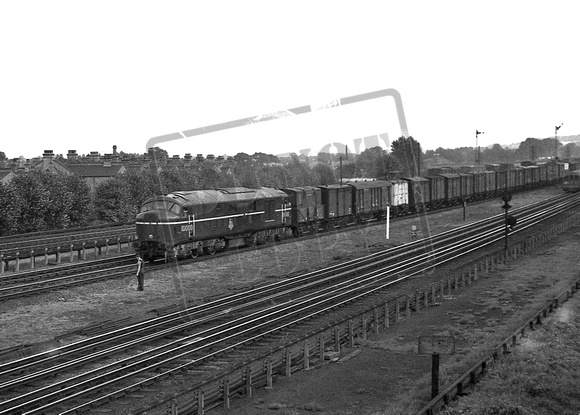 The two EE diesels were envisaged as mixed traffic locomotives

Born as the result of a meeting at Stafford on the 20th. of May 1946 held between representatives of English Electric and the L.M.S. the first of the two locomotives planned at that meeting and numbered 10000 emerged from Derby Works in December of 1947 , construction having been begun in the June of that year , to be followed by its sister 10001 which came into service in July of 1948 .
English Electric had been contracted to design and manufacture all electrical equipment on the two locomotives , including the four stroke Diesel power units which were of sixteen cylinders arranged in a " V " formation and producing 1600 h.p. , whilst the L.M.S. would be responsible for the body work and running gear .
Following a series of test runs and trials from St. Pancras with the L.M.S. Dynamometer Car conducted from January of 1948 " number 10000 " then ran further daily trials from its birthplace at Derby , but now rostered on scheduled passenger services .
There are records of the two Diesels being tested in comparison with the final two " Princess Coronation " class steam locomotives 46256 and 46257 , and if that is , in fact , the case then any such trials would have been in or about January of 1948 when " Sir William Stanier F.R.S. " and " City of Glasgow " entered service from new

Such a busy track network here at Harrow , with its electric suburban lines and West Coast main and relief lines clearly recorded by our cameraman in this image .
Although intended primarily for express passenger duties both 10000 and her sister could be found on freight workings as seen here , even having been restricted to such lesser duties a few years earlier when their steam producing boilers necessary whilst rostered on passenger duties were found to be less than satisfactory , a common fault with newly introduced forms of motive power for some time to come.
Following upon 10000 entering service in January of 1948 , after completion at Derby , there appear to be stories of her having undergone trials in comparison with Mr . Stanier's last two " Princess Coronation " locomotives , 46256 and 46257 , but the exact details and dates are unrecorded as far as I am aware .
The locomotive certainly underwent trials running between St . Pancras , Derby and Manchester Central with the former L.M.S. Dynamometer Car in the formation in Januaryof 1948 before entering a period of daily scheduled service runs between the Capital and Derby
From June of 1949 the pair worked regularly between Euston and Glasgow thereby extending their earlier duties which had taken them from the Capital just as far north as Carlisle although they made appearances on Blackpool services as well
© Rail-Online
Powered by ZENFOLIO User Agreement
Cancel
Continue