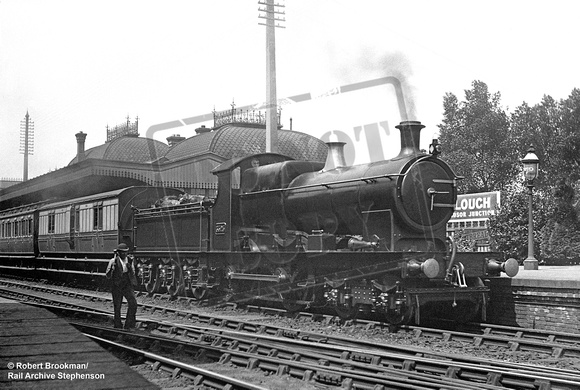 GWR 3521 class 4-4-0 No 3525 at Slough with a down train in 1902.
Peter Kerslake says "Even the gangers wore hats in 1902 and this fine fellow walks past 3525. Slough station's unique zinc "tiled" and domed roof sections, were not repeated by the G.W.R. elsewhere, the station dating from 1866.
One of fourteen of the class equipped with a Belpaire firebox with its parallel boiler from the previous year 3525 had started life as a 0-4-2 side tank engine in 1887. It was rebuilt into a 0-4-4 wheeled tank engine in early 1892 and then rebuilt again as a 4-4-0 tender engine as seen here in March 1901, lasting in service until early 1929.
Allocated from their early tank engine days of 1888 the twenty members of the class were at Newton Abbot and Plymouth for use on passenger workings into Cornwall. In their late years in their rebuilt form they returned to the West Country depots wih a few also being shedded at Bristol before many ended up on the Cambrian network in Wales."
Photo: Robert Brookman/Rail Archive Stephenson
Robert Brookman/Rail Archive Stephenson
Powered by ZENFOLIO User Agreement
Cancel
Continue