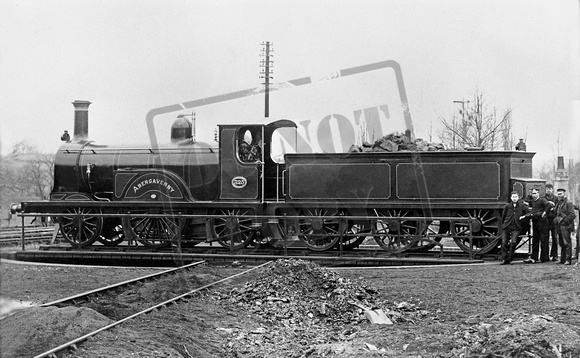 Stroudley’s smallest ‘Single’ (6’6” driving wheel) built in 1877. This attractive little engine named 'Abergavenny' (the only one of its type) stalled on Falmer Bank just outside Brighton when one of the passengers on board was Douglas Earle Marsh, Chief Engineer of the LBSCR. In a fit of rage Marsh demanded that the locomotive be withdrawn from service forthwith, and it duly was the following day, in June 1909.
This picture was taken at an unknown location, probably around 1900. The original tender fitted in 1877 was outside-framed so this inside framed tender is of a later date. Wooden brake blocks were retained throughout the engine’s existence.