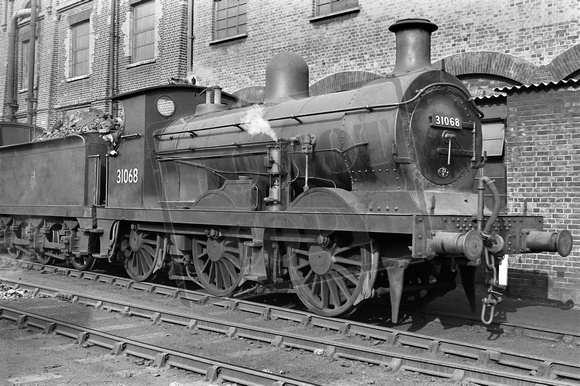 Ex-South Eastern & Chatham Railway Wainwright 'C' class 0-6-0 No. 31068. Built at Ashford in January 1903 as SE&CR No. 68 and withdrawn in October 1961.
Although you wouldn't know it from its latter day appearance, seen here at Bricklayer's Arms MPD in October 1956, the 109 'C' class members once carried a livery that defined the adjective "sumptuous" that can still be seen on the preserved 592. Harry Wainwright had designed the class to handle freight and occasional passenger excursion trains (e.g. hop-picking specials), throughout the SE&CR between Reading and the Kent Coast. The last twelve locomotives built in 1908 were fitted to steam-heat carriages enabling them to haul and prepare empty stock for express trains. The Southern Railway likewise fitted the remainder after 1923.