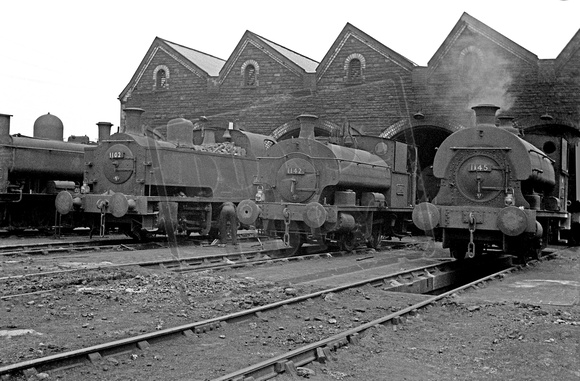 Peter Kerslake says "Situated just to the east of Swansea Danygraig Motive Power Depot was a substantial affair with all four roads into the Running Shed each having its own entrance, an unusual feature, its ornate and stone facade seen here to advantage in this splendid view from the mid 'fifties.
The depot dated back to 1896, built by the Rhondda and Swansea Bay Railway and even had a repair shop for its locomotives but the depot was closed to steam in January of 1960 and then totally closed four years later in March of 1964 only to become a wagon works. The lifting shop (off scene to the right of this view) burnt down in the 1970s but the remainder of the shed remains in industrial use (as of 2019 as least).
1102 seen here on the left is one of the 1926 built 0-4-0 Tanks built by the Avonside Engine Company to the specification of the G.W.R. whilst 1142 and 1145 were two of the Saddle Tanks built in 1905 by the Barclay Company for the Swansea Harbour Trust and taken into G.W.R. stock upon the grouping."
Powered by ZENFOLIO User Agreement
Cancel
Continue