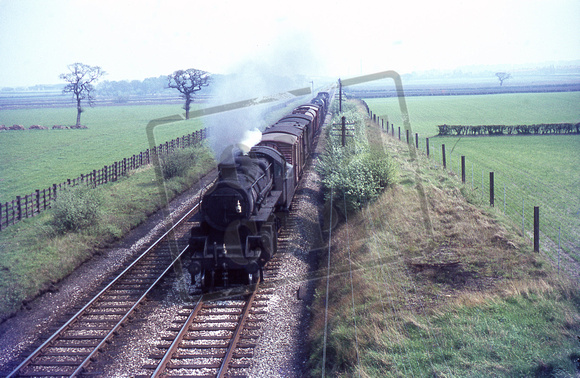 Between Cinderland Crossing and Dunham Massey at School Lane Bridge on the Skelton Jc to Arpley LNWR line. We are looking towards Cinderland Crossing/Altrincham, with Black Moss Covert behind the two trees. The signal in the smoke haze is Cinderland Crossing's Starter. The HV line pylons in the distance fed an industrial area (Churchill Machine Tool factory) situated between the railway and the Bridgewater Canal. The flying pig is missing its smokebox numberplate and maybe one of those transferred to Heaton Measey at the end. It looks like its on a trip working, in diesel days the only trip this way was T79 Arpley to Warrington Central and back. The freight traffic patterns were changing at this time, with everything concentrated on the Woodhead Route and this was the way through to Merseyside/etc. Thanks to Duncan Chaddock for identifying the location.

Steve Jones an ex fireman at cental adds "This is not T79 trip Warrington central to arpley twice daily, as there is no brakevan behind the loco for reversal at Skelton jct. This working was done by Warrington Central men with a Trafford Park loco" .
Powered by ZENFOLIO User Agreement
Cancel
Continue