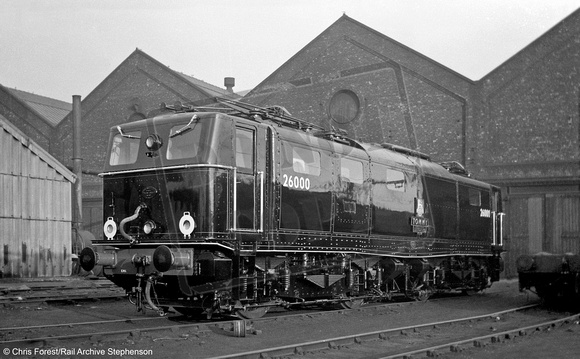 Peter Kerslake says "This splendid portrayal of the pioneer class EM1 trans Pennine locomotive shows her in new colours and fresh from Manchester's Gorton Works, adjacent to the route upon which it, and the remaining 56 members of the class would serve their working lives.
In this 1955 image 26000 still proudly carries her impressive "Tommy" nameplates, bestowed upon it whilst serving in Holland between 1947 and 1952 but which were for some obscure reason removed in 1968, but despite this 26000 was always known as "Tommy" during its subsequent working lifetime.
26000 had squared front windows, not incorporated in the design of the 56 later locomotives, and was also built with no cabside windows, unlike the later members of the class".