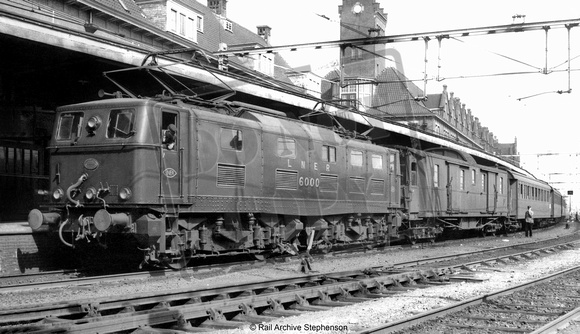 LNER class EM1 Bo-Bo electric No 6000 about to be un-coupled from train D35 Amersterdam to Basle in Maastricht station whilst on loan to the Dutch Railways, July 28, 1949.
Peter Kerslake adds"Further research has disclosed that a lack of suitable main line track for testing purposes in this country was the prrime reason for the pioneer class EM1 elextric locomotive going to the Netherlands at a time when Holland was endeavouring to formulate plans for new locomotives following the war and that Country's occupation.
Despatched via Harwich on the 1st Septmber, 1947, and beginning trials on the Dutch railway network on the 15th of that same month 6000 ran more than a quarter of a million miles without sustaining serious fault or failure during its sucessful period on loan in Holland before returning back home to England, again via Harwich,on the 28th March 1952.
Following the locomotive's return home it was named "Tommy" in a ceremony held at Liverpool Street station on the 30th June 1952 in recognition of its time spent in Holland and also to honour and remember the British soldiers who had taken part in the liberation of Holland during the lat war.
Much background information on the exploits of "Tommy" and the class can be found in E.M.Johnson's splendid book "Woodhead , The Electric Railway" published by Booklaw of Sheffield"