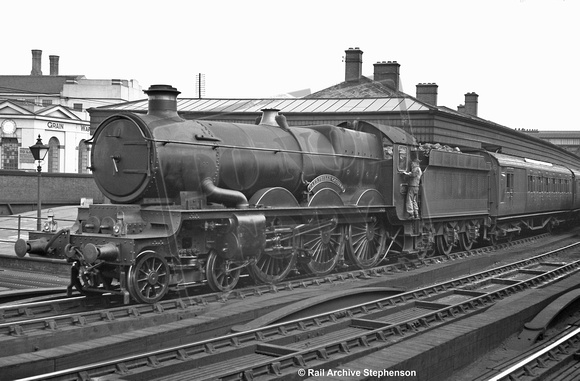 GWR Castle class 4-6-0 No 4073 Caerphilly Castle has just arrived at Shrewsbury with the 9.20am Margate to Birkenhead Woodside train in 1938.
Peter Kerslake says "The first true "Castle" at the northern end of Shrewsbury station in 1938. It would be interesting to know where 4073 came on to this Margate to Birkenhead duty as it was an Old Oak Common engine from new in August 1923 for much of its life. Later, in the summer of 1950, it moved to Bristol Bath Road . and apart from three months at the adjoining St Philip's Marsh depot remained there until February of 1957 when it was sent to Cardiff Canton from where it was withdrawn in May 1960.
4073 still has both lamps in position in this view so could well be working through Shrewsbury, and its fireman seems to be cleaning his side window."
Photo: Rail Archive Stephenson
Rail Archive Stephenson
Powered by ZENFOLIO User Agreement
Cancel
Continue