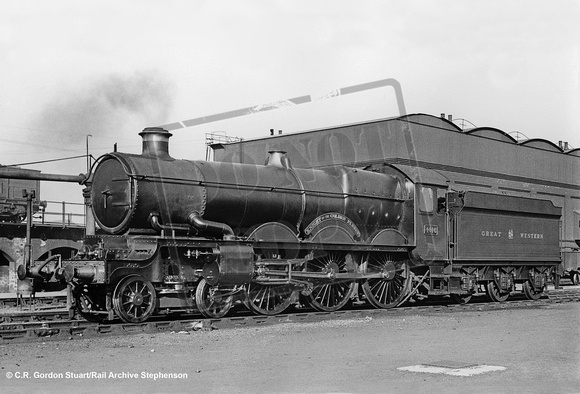 Peter Kerslake says "What a spectacular nameplate, surely one of the Great Western's finest, but 4016, seen here as rebuilt in October 1925 as a "Castle", lost that name in 1938 and became "The Somerset Light Infantry (Prince Albert's)" following a renaming ceremony at Paddington held on the 18th February 1938.
The locomotive was shedded at Newton Abbot for many years, but was condemned from her then home at Old Oak Common in September of 1951.
There is a rather unusual and unique pipe running from the side of the smokebox and clearly visible in this view which does not reappear in later photographs so it was clearly a temporary and experimental fitting doubtless having earlier been added at Swindon Works, but its function puzzles me, sorry to say!"