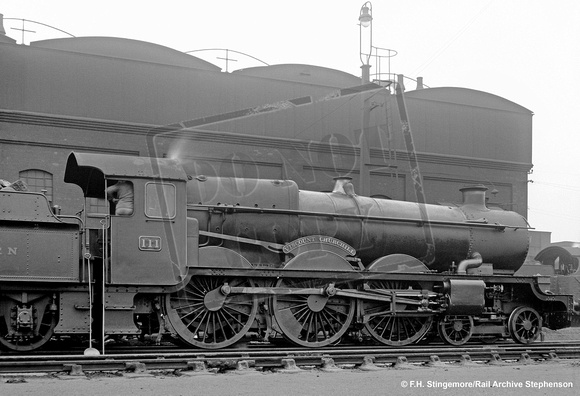 Peter Kerslake adds "Rebuilt as a "Castle" in January of 1924 using parts from "The Great Bear" there wasn't much difference in appearance between "Viscount Churchill" shown here and the production members of the "Castle" class as this view shows.
"Viscount Churchill" was one of the sixteen earlier locomotives rebuilt as "Castles" between 1924 and 1940 and I think the only "give away" were the joggled front frames seen here just behind the leading bogie wheel.
In her late years "Viscount Churchill" was used by her Shedmaster at Laira on rather less demanding duties than that Depot's other "Castles", but she lasted until July of 1953 often running down to Penzance and on the afternoon Kensington milk working from Plymouth. "
Photo: F.H. Stingemore/Rail Archive Stephenson
F.H. Stingemore/Rail Archive Stephenson
Powered by ZENFOLIO User Agreement
Cancel
Continue