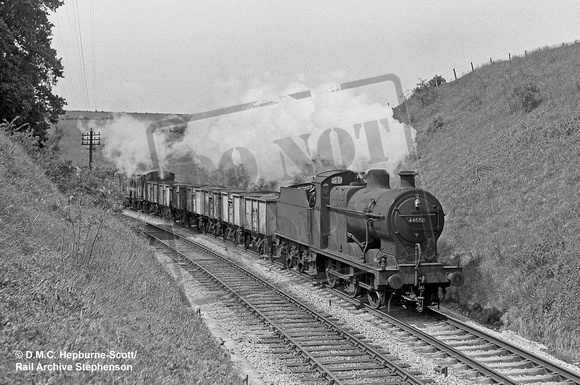 Peter Kerslake says "Despite their age the class "4F's" were used widely over the Somerset and Dorset line well into the 1950's, and as seen here, they were the mainstay of freight workings and secondary "All Stations" passenger duties although the class were also regularly rostered to piloting duties as well as banking and general shunting duties in and around Bath Green Park station and the adjacent Motive Power Depots.
Seen here at Wellow just south of Midford 44558 is now running on the dual track section of line which ran down from Midford to just past Templecombe and the working is heading towards Radstock.
Freight traffic on the Somerset and Dorset included general agricultural merchantise but it was coal from Norton Hill and Writhlington Collieries which accounted for much of the freight traffic, with both loaded and empty wagons to be handled and even pigeon specials and horse boxes making an appearance at weekends."