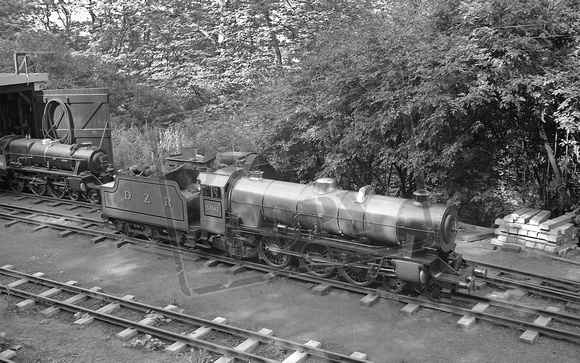 And now for something completely different... The 15 inch gauge Dudley Zoo Railway was opened in June 1938 running for a mile within the zoo's grounds. They ordered two of these Pacifics, both seen in this July 1957 view. Each engine was controlled by retired Great Western Railway drivers, Frank Bellamy and Harry Rempton and could carry up to 150 people on ten open coaches. The line had a fully working signal system, turntables, miniature platforms and bridges. After WW2 the line was rebuilt and simplified, the train ran in reverse on the return journey. Final closure came in 1992, the track and locomotives have been replaced by a 'Disney-ish' motor 'land train' about which railway enthusiasts cannot possibly - enthuse!
Dudley Zoo Railway 4-6-2 No.57512. Built by Guest & Saunders Light Engineering of Stourbridge in June 1938 and withdrawn in 1992. Current status unknown.