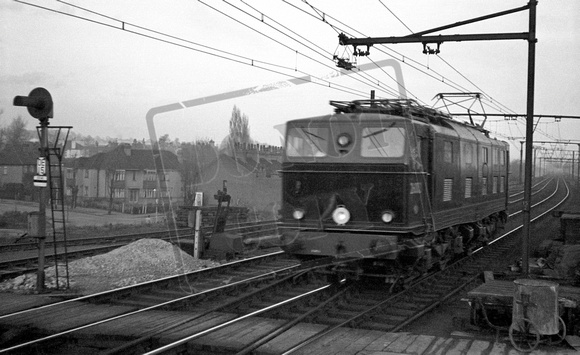 At Harold Wood station viewed NE, towards Colchester. No. 26002 was new and only the second of the production series of these Class EM1 locomotives built by Metropolitan-Vickers for the 1,500v overhead electrification between Manchester and Sheffield/Wath, which was currently in progress but not completed until June 1954. Here it was only November 1950, but the main line Liverpool Street - Shenfield had been electrified since September 1949. The locomotive's regenerative braking system may have been under test here, as it is coming down Brentwood Bank.

Peter Kerslake Adds "Yes , it is highly likely that this rare image has captured a " Light Engine " brake test for 26002 as from late 1950 until early 1951 the first ten production class EM1 's were to be found at Ilford Motive Power Depot from where they underwent tests on their regenerative braking systems on Brentwood bank , a lengthy incline situated on the former Great Eastern main line from Liverpool Street station , the ten locomotives later being returned home to the Wodhead line by June of 1951.
Regenerative braking , an essential feature for the class especially when handling lengthy trains of unbraked freight stock, was a feature which had attracted Sir Nigel Gresley during the early days in the design of the class, supplementing the customary air braking systems , and alloweing the axle mounted traction motor to act a additional braking , reversing the polarity of the electrical current and feeding electricity back into the locomotives' batteries or to the overhead catenary".
© Rail-Online
Powered by ZENFOLIO User Agreement
Cancel
Continue