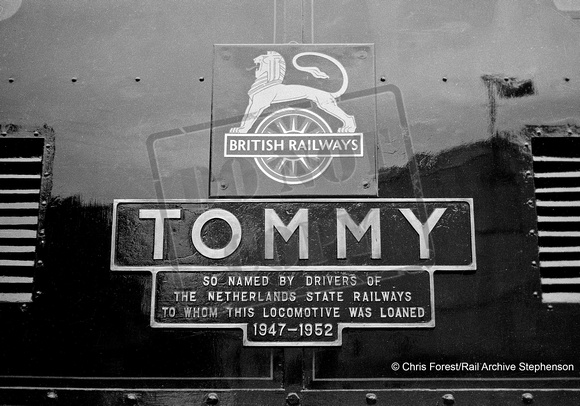 Peter kerslake adds " A close up image of one of the two nameplates borne by the pioneer class EM1 , built at Doncaster in 1939 and initially numbered 6701 , then becoming 6000 and later 26000 .
.Presented to the locomotive at a ceremony at Liverpool Street station on 30th . June , 1952 the two plates recorded the locomotive's lengthy period on trials in Holland from September of 1947 until its return home on 28th . March , 1952, the two namplates also remembered the vital role played by British servicemen, known as " Tommies " in liberating Holland from German occupation during the wartime years .
For some obscure reason , the plates were removed by British Railways in 1968 , the locomotive thereafter running nameless for its final two years until being condemned in 1970 , althouth even then it wa still affectionately known as " Tommy " .
One nameplate is retained in the Dutch Railway Museum at Utrecht , the seconcd having been presented to the locomotiv's principal designer , Edgar Caxton although following its sale at auction for in excess of £22000 it is now owned by a private collector "