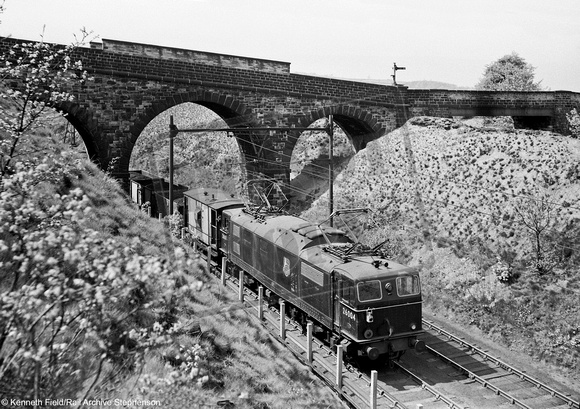 EM1 No 26004 banks a coal train from Wath to Penistone towards Oxspring Junction the in c1955. (This is the bridge used by Michael Sams the kidnapper of Stephanie Slater to collect the ransom money).

Peter Kerslake adds " The fourth production locomotive in its EM1 class , 26004 had begun construction at Doncaster in 1939 but its completion, together with a number of its sisters, was brought to an abrupt halt when war broke out and the Works found itself engaged in wartime production instead.
The pioneer member of the class , however, then numbered 6701, was in such an advanced stage of construction that the decision was made to finish the building of just that single locomotive, with all work on the remaining locomotives being brought to an end.
In the event it was not until 1950 that work began again on building the reminder of the class, but this time construction took place at Manchester's Gorton Works, with the pioneer memberof the class, later to be named "Tommy" being the sole EM1 being built at Doncaster "
Photo: Kenneth Field/Rail Archive Stephenson
Kenneth Field/Rail Archive Stephenson
Powered by ZENFOLIO User Agreement
Cancel
Continue